I’m a size queen when it comes to money and even more so with gay money. Here’s why gay money’s important and how we can all get more.

In the U.S., the purchasing power of gay money is estimated at nearly $1 trillion! That’s more than the Asian, African American and Hispanic communities. By population, gay money is massive. In fact, it was roughly 14 percent of all disposable income in the U.S. in 2016. On a global scale, our purchasing power jumps to $3.7 trillion.

Why should we talk about gay money? Because size matters.

As gay money makes up nearly 14 percent of U.S. disposable income, it means the queer community heavily influences the way America spends. It means, as a community, we must use our money to influence the national dialogue and enact positive change for the queer community.

Our purchasing power is the reason we’ve seen an increase in marketing to the queer community. It was in 2015 when many companies wholeheartedly embraced the queer community with open arms. Companies like MassMutual, Campbell’s Soup, Kohl’s, Ikea and Chevrolet went digitally and visually to mass markets and said: “We’ve opened our doors to gay money.”

As we learned in 2016, though, we still have concerns about equality at both the state- and federal levels. For example, there are still 30 states where a queer person can get fired for their sexual orientation or gender identity. Therefore, it’s vital that we stay alert and recognize the strength of our gay money.

Gay money is strength, though

Our strength, though, lies in how we spend our gay money, and our spending is incredibly different than our straight counterpart’s spending.

Gay and lesbian couples earn more than straight couples. The average lesbian couple, according to Experian, earns $7,200 more and the average gay couple earns $8,000 more than our straight peers. The disparity in spending is even wider.

Nearly 80% of queer couples aren’t raising children, says the Williams Institute. Per a 2013 USDA study, it currently costs about $245,000 to raise a child from birth to the age of 18, not including college costs. As queer couples, we skip a major expense that many of our straight counterparts don’t.

There’s an amazing opportunity for the queer community to make our gay money more impactful. If used strategically, our dollars can enact positive change for years to come.

Are you using your gay money wisely?

How you spend your money is up to you. I’d, however, like to present you with a few facts and opportunities for making your gay money more impactful on you and the queer community.

Do you see the opportunity? A significant portion of what could be saved is being spent.

Where are we spending our money? Per the 2016 Prudential LGBT Financial Experience Survey, we’re spending our gay money making ourselves feel good. 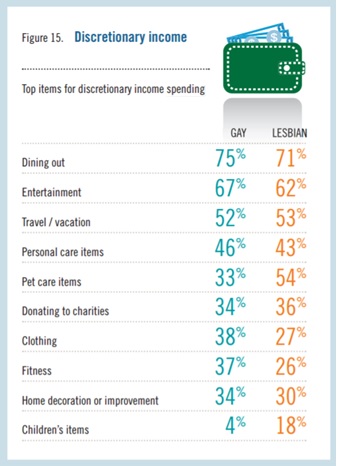 For years, John and I spent this way. This is how we acquired $51,000 in credit card debt. Over time, we learned that we were making up in our adulthood for low self-esteems during our childhood. While this provided temporary enjoyment, it brought long-term unhappiness and served neither us nor our queer community.

Despite our strength, we still face challenges. Such as:

The opportunity with our gay money

What can you do to better serve yourself and the queer community? We have five suggestions on how to use your gay money:

2 responses to “Gay Money Could Build a Strong Queer Community”